In keeping with NaBloPoMo for February’s theme of “make”, I would like to share a special doll made by my grandmother forty years ago.

In Germany in the early 1800s, wooden dolls (peg woodens) were made with decorative combs carved (tucked) into their hair. These dolls were called “Tuck Comb Dolls” and were very popular for many years. Their heads and torsos were generally turned in one piece on a lathe, and their arms and legs were jointed at the shoulders, elbows, hips, and knees, respectively.

I have in my collection a beautiful Tuck Comb Doll, made not in the 1800s, but in 1974, carved, painted, and dressed by my Grammy Buffington in the old style. Her face is beautifully painted, her hair parted down the middle with little spit-curls in front of each ear. And as was typical for this type, her lower legs and arms were nicely finished and painted, with the wood on her upper legs and arms left raw. She wears delightful painted-on red shoes that match the sash on her gown. She also has a fine linen petticoat and pantalettes lavished with lace. 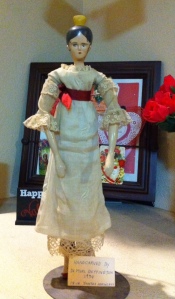 My precious Tuck Comb Doll, carved by DeMurl Buffington in 1974. 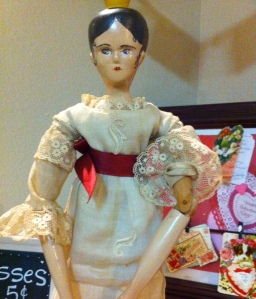 This close-up shows her left elbow joint and how her lower arm is beautifully painted and smooth, while her upper arm is unpainted raw wood.

What treasures do you have that were made by family members?

Heart of a Southern Woman

A snapshot of life one blog post at a time.

The Littlest Woman: The Life and Legacy of Lizzie Alcott, the Real Beth March
Growing the Ball Family

Please join us on this radical journey of pure obedience!

the journey to six
Raising My Rainbow

Publishing My Cancer Research Journey at 16

~Plucking Of My Heartstrings~

Handmade gifts for every budget

random thoughts 'n things from the life of jacob

Book reviews, writing, and so much more

The Dystopian Nation of City-State

She's off on another Tangent (digressing suddenly from one course of action or thought and turning to another) it's a "Kimmy" thing..

Taking it up to Sixty . . . and Beyond
Taggle Talk

A happy, self-indulgent space where I write things for YOU to read! These things I write about include life, travel, first world problems, myself and other people. Sometimes I try to be funny, but mostly I'm not.

Home of the Unicorns and Rainbows CTMH Team

A Canadian poet, his poetry & other works

For the OffBeat World...

pieces of me
Project Prose

Exploration through writing, photography and art

wishing for a really long and very happy ending

If you could read my mind

A fantasy Author with too much free time on his hands that likes to Support Indie Authors.

“Everyone who is seriously involved in the pursuit of science becomes convinced that some spirit is manifest in the laws of the universe, one that is vastly superior to that of man.” - Albert Einstein

For those about to read, I salute you !

Inside Out and Wide Open

I write to taste life twice.

Written by the Wild, Wondrous and Wacky Kat & Jo

Words Of A Journey

A mom's journey with her daughter's Leukemia

Inspired by a mint colored kitchen.

Sometimes lunatic, other times confused, always rambling. Names are changed to protect the innocent and the guilty.